The last couple of years, the little one has wanted the same birthday party theme the big one had the year before. We had two Frozen parties, and now we’ve had two Minecraft parties. I’ve previously posted about Sophie’s Minecraft party (where I dyed my teeth green and made a cake so bad I looked for a toy dinosaur to stick on there and blame!), so at least I knew what mistakes I didn’t want to repeat this go-round.

And I admit – I have a problem with procrastination. I always think I have so much time and then it bites me in the ass because I’m rushed and stressing. We seriously had NOTHING for this child’s party until the night before. I got out of work Friday and ran a few towns over to a Party City and decent-sized Walmart for decorations and presents.

The party was fantastic – we had just enough kids for chaos and screaming but not so many you couldn’t walk without knocking over anyone. Here’s some highlights: 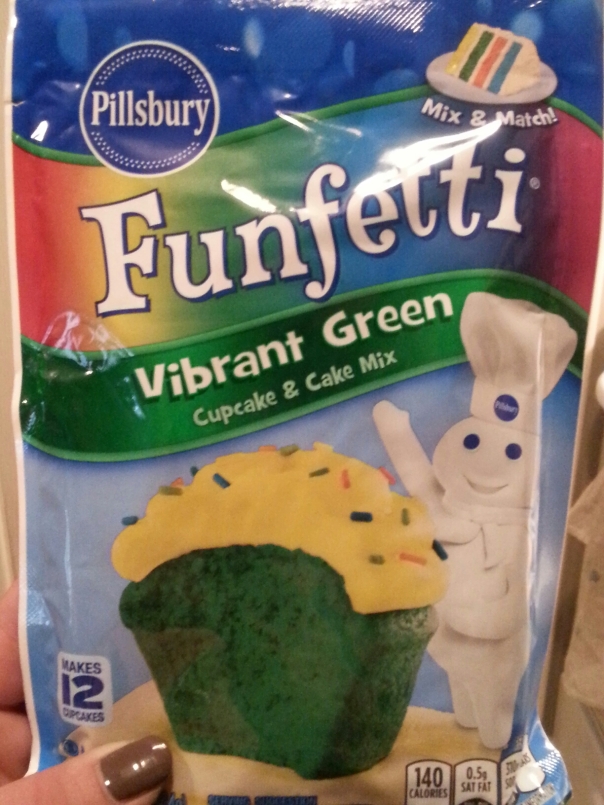 ​The cake mix – this time, I thought a green cake mix would be a fun surprise for everyone. I got nervous when it came out of the oven looking like mottled green and brown on top,

​but when I was cutting it up to serve to the masses it was the vibrant green it advertised.

​The blocks were part of the girls’ Minecraft playsets and the spider was A toy I bought for $10. It actually has wheels on it so it moves too. Brown icing and green sugar glitter made it more presentable. I wish I had taken pics after the candles were in and lit – it was so cool!

​My little candle bundles. Red candles bundled together with a black one in the middle pushed up slightly higher to make a wick, wrapped with masking tape and I wrote “TNT” with a black Sharpie. Big hit!

​Our balloons. Regular colored balloons I took a giant (the biggest I have EVER seen!) Sharpie to. I inhaled so much Sharpie smell I started getting dizzy. 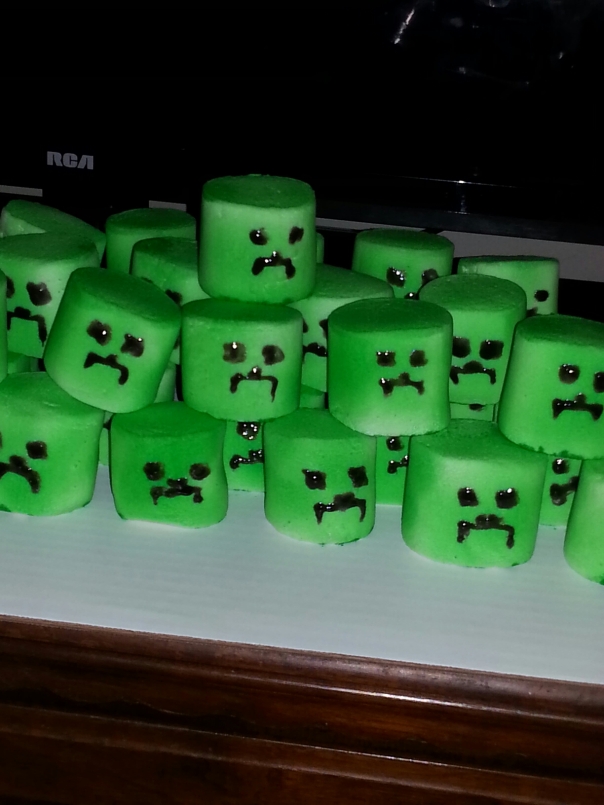 ​Now these little guys, I’m super proud of. While I was shopping at Walmart, I came across tiny cans of edible spray paint in the fondant section. I immediately grabbed them even though I wasn’t sure what I would wind up doing with it – but just look at ’em! Campfire marshmallows are bigger than the regular ones and worked perfectly for this idea. Then I just grabbed a small tube of black icing to draw on the faces. The kids went crazy for them! 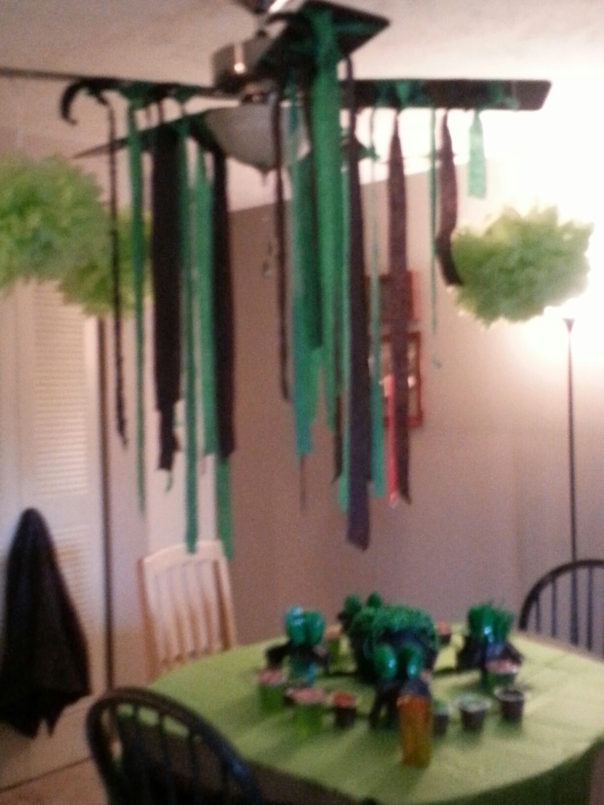 ​Pardon the bluriness, but you get an idea of how I decorated the ceiling fan over our table with poofy tissue paper balls and streamers torn into different lengths and tied to the fan blades. I went back and forth on whether I liked how it turned out, and there’s some debate on whether I almost set fire to the streamers while bringing the cake with the lit candles over to the birthday girl (I’m fairly certain there was no danger, but others watching disagree).

​Our table spread. I layered black tablecloth under the green (thank you, dollar store!) So both colors showed on the bottom, found a pot of green necklaces at Party City for St. Patty’s day I comandeered for the party because what kid doesn’t like to layer on the bead necklaces, bought pudding cups that I added icing to in our theme colors, and found jello cups in lemon-lime that were the perfect color. Everyone loved it, but the icing did start running and get a little watery-looking if not eaten right away. 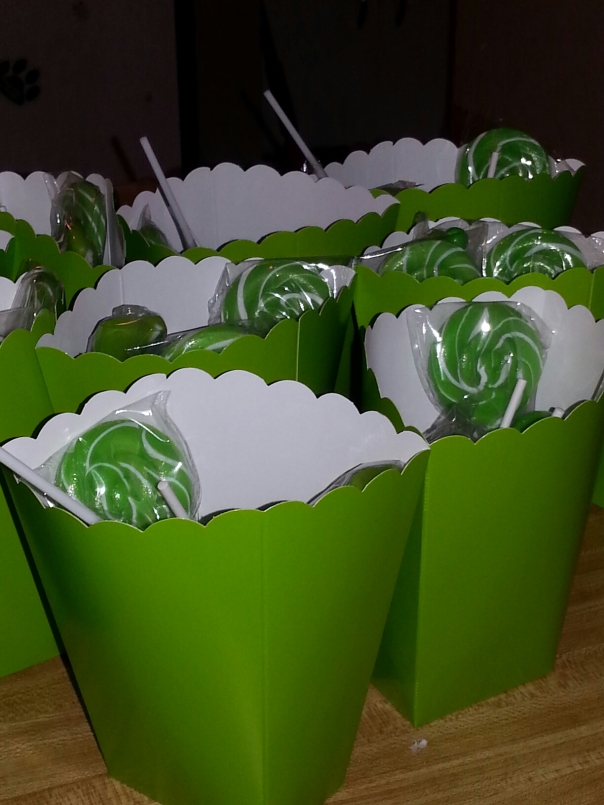 ​Party favors were a repeat of last year’s style, but almost all the candy was on sale this year and I didn’t make creeper faces on the cartons – I’d already inhaled way too much Sharpie and was afraid I’d go loopy! No one seemed to mind, but I wish I had done it.

So that’s my little’s Minecraft party in a nutshell. I also had green tassle banners over our balcony doors I didn’t get pics of, and spiders made out of balloons and streamers like the last time. All in all, the party was a huge hit and we all had a blast! Since we did so much ourselves it really kept the cost down which made me a happy mama.